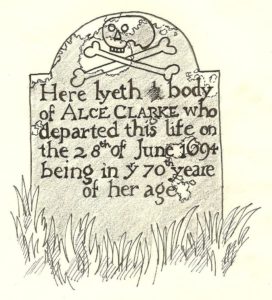 The Churchyard contains many interesting gravestones, but the oldest have long lost their inscriptions. A list of all the memorials was compiled in 1885 by Arthur Ridley Bax which is of considerable help since many of the inscriptions have weathered beyond recognition. Another survey was made in 1984 by members of the West Surrey Family History Society. A list of the graves and stones can be found on this document.   The Churchyard became full and the adjacent Burial Ground was opened in 1910 and extended in 1956. Exterior floodlighting was added by the Friends of Capel Church as a millennium gift to the Church.

The oldest surviving headstone is for Alce (sic) Clarke who died in 1694 in her 70th year of age. A rubbing shows a skull and crossbones, that were popular about this time, symbolizing one’s mortality, later more uplifting symbols were used on headstones.

In 1864 a stone wall was built around the Churchyard with a lych-gate at the entrance. Close to the entrance is a yew tree that has been dated to be 1700 years old. Legend has it that a ghost will appear to anyone who walks a hundred times round the tree at midnight! 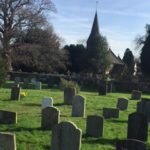 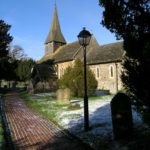